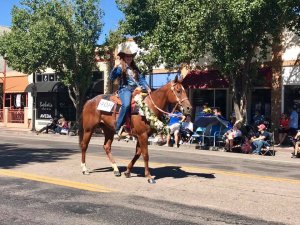 Joe Folda has been named the Honorary Marshal for the 2018 Colorado State Fair Parade. Folda, former Colorado State University-Pueblo Athletics Director, served students in Pueblo since 2005 after working as interim director in 2001 and 2003-2005. Prior to becoming director to Pack Athletics, he served as the head men’s basketball coach for 18 years. Folda made a significant impact on CSU-Pueblo athletics, both in terms of sports, athletic facilities, and the number of student-athletes. Folda retired from his station earlier this year.

The parade route officially begins at B Street and Union Avenue where it continues down Union Avenue to City Center Dr., north up Main Street to 8th Street where it concludes. For more information about the Colorado State Fair Parade, visit pueblochamber.org or call 719.542.1704.